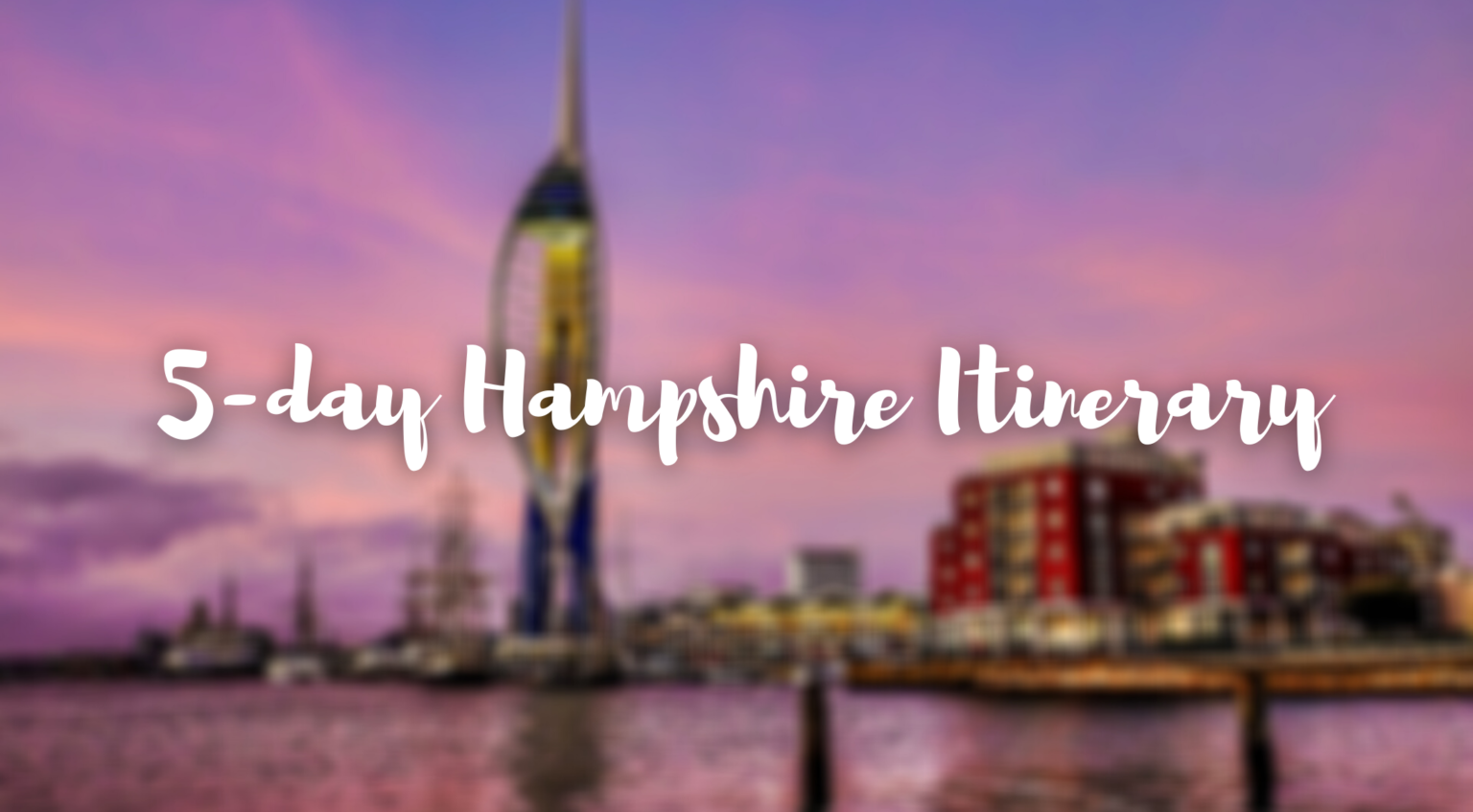 Often overlooked by mainstream tourism, Hampshire has got a lot to offer to all sort of visitors. Whether you are looking for somewhere to explore some of the most important heritage sites in the UK or immerse yourself within nature, or simply spend a day at the beach and treat yourself for a drink at a fancy bar, Hampshire has got it all. Located just a quick drive from London, Hampshire is the perfect getaway for those staying in the capital who are looking for a different perspective of England. 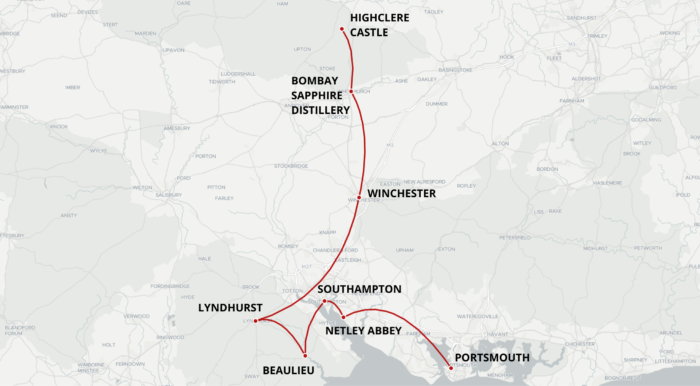 If you love all things Downton Abbey, look no further than Hampshire. In fact, this itinerary kicks off with no other than the location in which the TV show was filmed: Highclere Castle. 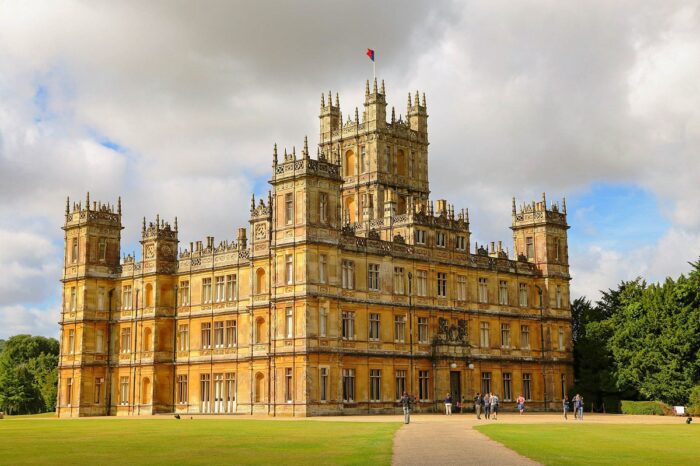 Highclere Castle is a 19th century architectural beauty and residence of the real Earl and Countess of Carnarvon. After decades of struggle, the worldwide success of the TV series Downton Abbey generated an inflow of over 1,200 visitors a year to this magnificent palace, making it one of the must-visit attractions in Hampshire. During your visit you will explore the Castle and some of the interior filming locations, such as Lady Mary’s bedroom and the grand oak staircase, but do not forget to visit the Gardens and the Egyptian Exhibition in the cellars.

Why not continue to live the upstairs lifestyle of Downtown Abbey by taking a trip to the Bombay Sapphire Distillery. In less than a 15-minute drive, you could be clinking glasses of one of the world’s most famous gins. Albeit you might want to take a taxi or designated a driver for this one. 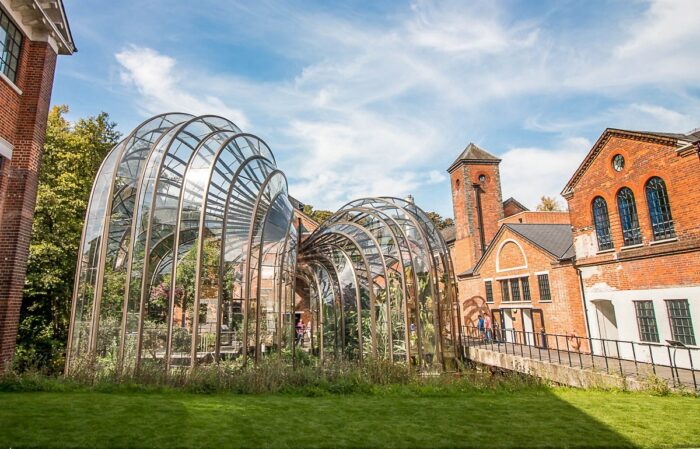 Bombay Sapphire is one of the world’s most famous gins, and its main factory is right here, in Hampshire. The distillery operates on the site of the historic Laverstoke paper Mill, and in this tour you will learn about all that goes into the craft of making gin, from the botanicals used for its recipe, to the rare production processes, and ending with your very own gin-based cocktail from the scenic bar on shores of the river Test.

From the Bombay Sapphire Distillery take a quick drive south for less than 30 minutes and you will reach the former capital of England and one of the most historically important towns in the south of England: Winchester.

After having lived in Winchester for nearly three years I can say that Winchester is a place you should not miss. Voted as “the best place to live in the UK” in 2019, Winchester is located by the placid waters of the Itchen river, and it is surrounded by green hills and lush countryside. The cathedral town of Winchester is one of the most important historical centres in the whole United Kingdom. Throughout its history, Winchester was an Iron Age settlement, a colony under the Roman Empire (under the name Venta Belgarum), the ancient capital of the Kingdom of Wessex under King Alfred the Great, until it became a strategic cathedral city under the Norman domination. Even though nowadays Winchester has become a calm, small town, its history echoes at every corner.

Start your journey by exploring the majestic Winchester Cathedral, resting place of British novelist Jane Austen and several ancient kings and queens. Continue by visiting the Great Hall, what is left of William the Conqueror’s Castle and now home to the iconic Round Table of the Arthurian legend. But there are so many other historical buildings that is worth visiting in Winchester, such as the Westgate, the Hospital of St.Cross, Jane Austen’s house, Winchester College and Wolvesey Castle.

Once you have finished visiting all the main attraction, head to the viewpoint at St. Giles, which will offer you a unique view over the entire town. And if you fancy a walk, do not miss the path that leads to St.Catherine’s Hill, the original site where the first settlement used to stand built during the Iron Age. During the lovely walk on the banks of the river Itchen, keep an eye out for the abundant river wildlife such as swans, herons, water voles and otters.

Alongside historic and religious buildings, Winchester is home to a thriving food and drink scene, with independent pubs and cosy cafés everywhere. If you want a pint of ale, head to the Black Bottle and you will find one of the most bizarre pubs you will ever visit.

Having experienced the small but busy Cathedral town of Winchester you may want to take a trip deep into the countryside. With its never ending stoney paths, muddy off-track routes and wonderous canopies of oak and beech, the New Forest National Park is not to be missed. The ideal place to start your visit to the New Forest is Lyndhurst, one of the most charming villages in the National Park. 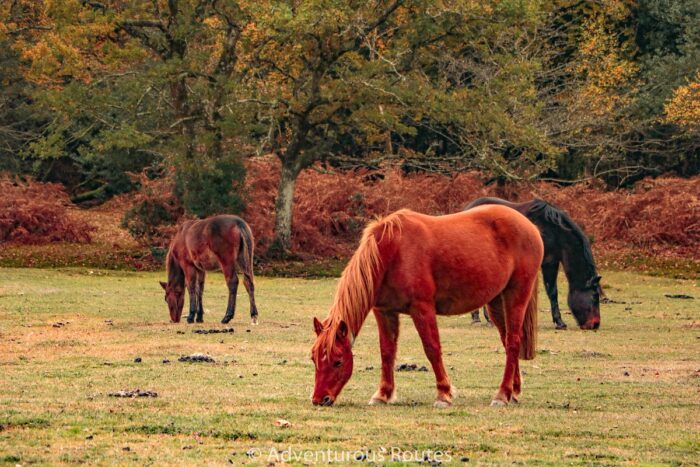 Since the times of William the Conqueror, Lyndhurst was frequented by the British nobility, and the woods around it were used as hunting grounds. Luckily nowadays hunting is not permitted here, and in the woods it is possible to come across a broad diversity of wildlife that includes deer, boars, badgers, foxes and wild horses. Yes, wild horses. Get lost in the woods and it is likely you will spot a few of them roaming freely in the forest. Several parts of the forest are still mostly untouched, which makes a walk in these woods a fantastic experience. At the end of your walk you can stop at one of the many traditional country pubs in the area

Only 16 minutes south of Lyndhurst you will come across another gem of the New Forest National Park: Beaulieu. 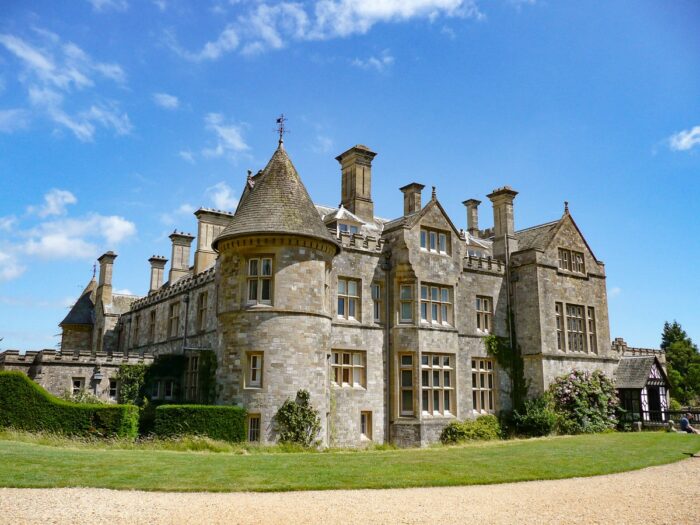 Nestled at the head of the tidal Beaulieu River, the village dates back to the 13th century and it grew around the abbey founded in 1204 by Cistercian monks. The main attraction in Beaulieu is the National Motor Museum which houses nearly 300 vehicles from all over the world, from cars used for land-speed records to F1 cars to vehicles from the TV show Top Gear. From the Motor Museum you can access Beaulieu Abbey and the Palace House, home of the Montagu family.

If walking around the New Forest wasn’t enough and you are left wanting more , take the short 3 km path to Buckler’s Hard, a pretty shipbuilding village immersed in the most tranquil atmosphere you could possibly wish for. And to end this day perfectly, you can rent a kayak and paddle in the beautiful Beaulieu River Nature Reserve.

Southampton is often missed off the list of Hampshire travel itineraries, but not here. Southampton is home to a bustling cruise terminal, which brings tourists from all over the world to Hampshire. Often with little more than a day to spare, tourists are keen to head off to attractions around the hottest destinations in the area, such as Winchester, Salisbury or Portsmouth, and because of this some gems are missed. Nevertheless, Southampton remains a place of significant importance in the history of England: important settlement in Roman times, crucially strategic city during medieval times and later on one of the largest ports in the United Kingdom. 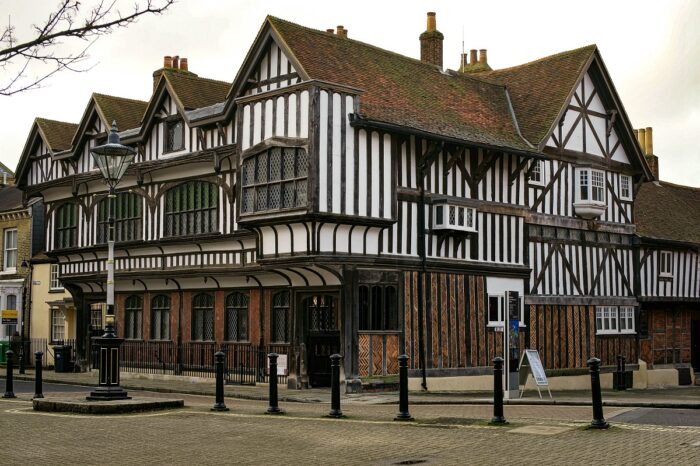 Two events shaped and troubled Southampton’s recent history. It is from Southampton that in 1912 the Titanic left for its legendary one-way journey to the bottom of the Atlantic Ocean, and during World War II the city was heavily bombed by the Nazi Luftwaffe in the so-called Southampton blitz. This caused most of the city’s historical legacy to be destroyed, which is the main reason why the city and its architecture are so modern.

Some of the highlights you can visit in Southampton include the SeaCity Museum, the Tudor House and Garden (pictured above), the Medieval Walls (some of the best preserved in the whole country), the Bargate and the Medieval Merchant’s House.

If you want to feel like sitting down for a drink, one of my favourite spots in Southampton is the Dancing Man Brewery. In this microbrewery it is possible to have some of the finest craft ales in the entire Hampshire, and the location has an incredibly fascinating history. In fact, the once called Wool House was used as a prison for French prisoners of war during the Napoleonic wars. The names of some the prisoners can still be seen today, carved on the beams of the roof.

Once you have finished exploring Southampton, drive east for 15 minutes until you reach Netley Abbey. 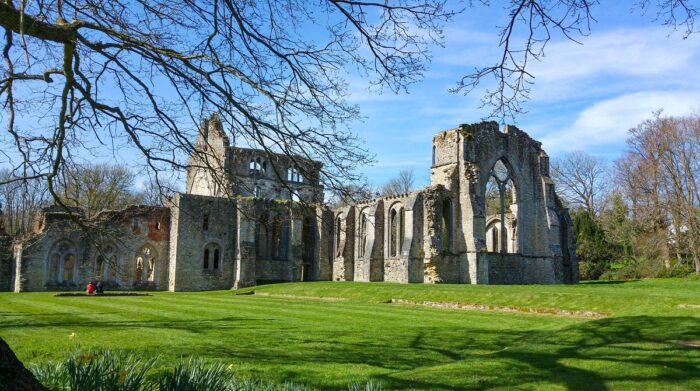 The abbey was founded in 1239, and it has since then inspired artists, writers, painters and poets. Nowadays Netley Abbey is the most complete surviving abbey built by the Cistercian monks in southern England and its ruins are something you should not miss.

Do not forget to visit the nearby hospital at Royal Victoria Country Park, named after Queen Victoria herself, who officially opened it in 1863. During its 115-year history, the hospital treated thousands of wounded servicemen from conflicts across the British Empire and both World Wars. Nowadays, the tower is only remaining part of the hospital, but the panoramic view from the top of the tower will let you imagine the size of this once impressive structure. From here you will also see the trainlines that once transported injured servicemen from the jetty to the hospital, and the war cemetery near the seafront.

The last leg of our journey through Hampshire will take us from Southampton to its rival city: Portsmouth. 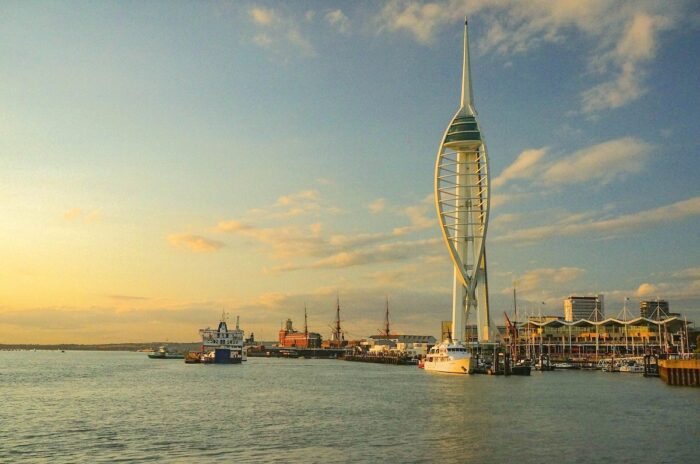 Portsmouth is a truly fascinating naval town and is jam-packed with things to do, most of which revolve around the city’s maritime heritage. Most of these attractions are located in the Portsmouth Historic Dockyard.

The Historic Dockyard is home to the HMS Warrior (1859–1861) and the flagship of Admiral Nelson’s fleet, HMS Victory (1759-1765). Both warships rest in dry dock and visitors are invited to explore the decks and imagine themselves as a gunner, or a shipmate working long and tiring hours below decks. After making your way across the deck you can be transported into the Tudor era and experience life onboard King Henry VIII flagship: the Mary Rose.

Rescued from the bottom of the sea and miraculously restored, the ship is now displayed under strictly controlled ambient conditions in order to prevent the fragile structure from deterioration. If your hunger for history is still yet to be fed, head over to the D-Day Museum which marks the history of the D-Day missions. Portsmouth was in fact the main departure point for the military and naval units destined for the amphibious attack on the Nazi-occupied coast of Normandy, in what went down in history as Operation Overlord.

After a busy day and a whistle stop tour of British history, the perfect end to your day can be found at the Spinnaker Tower. The viewing tower (170 meters high) is the city’s most popular landmark, and from the top you can enjoy amazing views over the harbour, the warships anchored at the dockyard, the Solent and the Isle of Wight. Head up the tower just before sunset in order to enjoy the view with most beautiful sunlight.